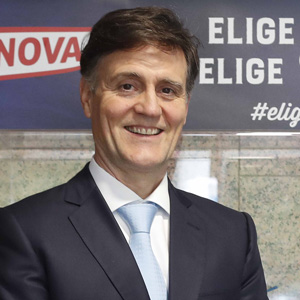 José María holds a degree in Economic and Business Sciences of the Complutense University of Madrid, an Executive Development Program (PDD) of IESE, and an Advanced Management Program (AMP) of MIT Business School, Cambridge, MA, USA.

Benavent began his professional career in 1989 as analyst at the research department of the Bank of Spain until he joined Caixabank in 1994, where he held different positions in the risks department until becoming the head of that department. In 1998, and after the liberalization of the Telecommunications Sector in Spain, he was asked to take part in the launching of a Telco company, R-Cable, he was its CFO until 2015, year in which he moved, also as CFO, to another company in this sector, the Euskaltel Group.

Benavent has received the Best CFO Award of the VI edition of the Financial Excellence Awards of the Spanish Finance Professionals Association (ASSET).

We use cookies to obtain statistical information about the user’s browsing of the website. By continuing to use this website you are giving your consent to cookies being used. AcceptAdditional information is available here.